During the past two decades several major technological innovations have fundamentally changed the music industry in general and the record industry in particular. Disruptive technologies (innovations that change a product or service in ways that a market does not expect), in particular appearing within networking and digital audio, have caused major shifts in the working-methods of music production and distribution. Professional music production has rapidly changed from being based on more centralised, industrial models of organisation towards decentralised, networked models of organisation. Music production had generally been conducted in a single large studio facility; nowadays it is distributed over a network of specialised recording facilities, ranging from mixing studios, to location recording companies or to home studios. Although decentralised music production is quickly becoming a standard mode of work and seems advantageous for those professionally active – not in the least from an economic point of view – it also poses various problems. Key issues a music producer faces in this realm are effective content management and managing creative endeavour of participants in decentralised, sometimes rather loose collaborations. 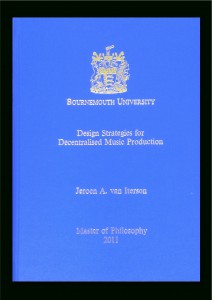